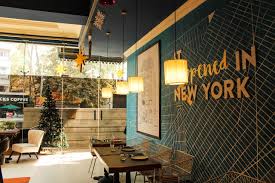 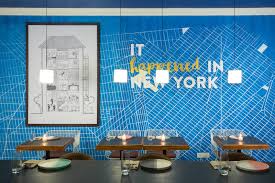 It Happened In New York

This three-storied Bandra restaurant is likely to find an audience despite some misses on its menu.

As homage to the city’s vibrant restaurant culture, the menu at It Happened In New York (IHINY) acknowledges these diverse influences.

IHINY is a welcome change from the Mediterranean-influenced eateries that throng Bandra. (Prodip Guha/HT Photo)

A plate of bite-sized, Instagram-friendly rainbow bagel amuse-bouches are presented immediately after we place our order. Chewy and firm with a filling of cream cheese and olives, they’re an amusing start to the meal.

The Baja fish tacos are as camera-friendly as they are tasty. A plump, batter-coated fish finger sits on a bed of creamy guacamole, sour cream and a tart pico de gallo. At the base is a two-toned tortilla made partly from corn flour and partly from black rice flour.

The Baja fish tacos with pico de gallo, tart cream, guacamole, and a tortilla page are as tasty as they are camera-friendly. (Prodip Guha/HT Photo)

Not as pretty or as tasty are the diced fried chorizo and American cheddar cheese. They have the casual appeal of a bar snack; a tapas-style version of boiled channa and chopped onions served in most Indian dives, if you will.

From the Clean Food section of the menu, we order the buckwheat pancakes and are presented with a terribly conceived dish that is difficult to eat. Folded like a thick envelope, the pancake is filled with a cauliflower couscous that tastes like sheera and a beetroot-and-carrot slaw whose crispiness is at odds with the softness of the pancake. At the bottom, melted bocconcini sits like deadweight.

We aren’t charged for the pancakes but we are for the marigold fizz, which we barely touch. The gin-based cocktail with sugar, lime and soda that’s sprinkled with marigold leaves has an unpleasant aftertaste of plastic. It came as a big disappointment after the West Side smash, a refreshing, sweet-sour combination of lime, basil, cucumber syrup and St Germain elderflower liqueur.

Korean Fried Chicken, served with gochujang sauce, is one of the restaurant’s highlights. (Prodip Guha/HT Photo)

The chunky batter-coated Korean fried chicken, topped with a thick coating of sweet-spicy gochujang sauce, is polished off quickly. But we’re quite unhappy with the scrawny sausages used in the two hot dogs for the Recession Special. For a dish inspired by a budget meal, it’s rather insubstantial.

Guests saunter in late at IHINY. The three-storied restaurant, which was empty when we ordered the starters, is almost full by the time our main course is served and diners are still trickling in. Most of them have occupied the bar lounge on the first floor and the second-floor enclosed terrace. The ground floor, which has the grandeur of a Central Park-facing apartment, remains empty when we leave; but looks like it would be buzzing on a weekend.

IHINY is a welcome change from the all too common Mediterranean-influenced cafés and bistros that populate Bandra. And though the new American administration may not be the flavour of the season, IHINY is quite likely to find a favourable audience.

WHAT: It Happened In New York

COST: Rs 3,500 for two including a cocktail each

(HT reviews anonymously and pays for all meals)